With the release of The One Armed Bandit, Yggdrasil is inviting all players to kick up some 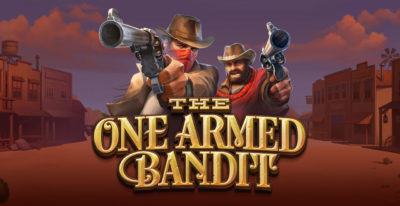 dust and embark on a wild adventure. In this game, your goal is to capture five villains that are roaming the streets of Yggstone. Doing so could prove very rewarding. Indeed, the bounty on the bandit’s head could reward lucky players up to 160,000 coins.
All and all, this 5 reels, 3 rows, 20 paylines game is certainly different than other games of the genre release by other providers this year. Granted that the other western theme slots are still are fun and for different reasons. But so far, Yggdrasil appears to once again emerge as the pack leader given the huge multipliers in both the base game and Free Rounds The One Armed Bandit offers. But let’s tell you more about this July 2019 release and see if you agree with us.

From our experience, the Free Spins bonus was fairly easy to trigger when we tested The One Armed Bandit video slot. And this is because you won’t need to get 5 Scatters on the reels at once to activate the feature.
In essence, you’ll trigger the bonus game once you’ve collected 5 Scatter symbols. And consequently fill-up the meter that sits above the reels. It’s worth knowing that each Scatter symbol you’ll collect during the main game will reward you a Re-Spin. Plus, the collected Scatter always turn wild during a Re-Spin.
Now once a meter is full, you’ll play an undefined number of free rounds with 5x multiplier (to start with). And you’ll have the chance to win more Free rounds and increase the multiplier index (up to 20x) as you progress on the ladder above the reels in the bonus.

As you can imagine, The One Armed Bandit video slot symbols are all western theme. The high-value symbols are a gun, a flask, a hat and boot chevrons. But the highest value symbol is certainly the wilds since it’s also a multiplier. In fact, each wild symbols will award you a 5x multiplier when part of a winning combo. And the good news is that the multiplier can add up too. But they’re capped at 100x. Now talk about a base game with superior value, right?
Last but not least, they’re only 4 low-value symbols in this game, the heart, space, diamond, and club.

Our thoughts on The One Armed Bandit video slot

The One Armed Bandit video slot is perhaps not the most complex game developed by the studio. And that’s both in terms of graphics and feature. But it doesn’t mean it’s a bad slot. In fact, when we tested this game, we especially like that each Scatter symbol (in the base game) awards a Re-Spin. Which means you’ll have a second, third and even fourth chance at activating the bonus. So, this game is truly remarkable because you’ll rarely get frustrated when a Scatter didn’t show up when you need it. And naturally, because of this, this game is an excellent bet for all levels of players. Even if the volatility index is higher than most Yggdrasil slots. Now after reading this, perhaps you’ll agree that The One Armed Bandit is one of the best western slots released in 2019. But to be sure, visit any casinos mentioned on casinoservice.org.