Sherlock of London is bringing to life another adventure by the iconic British duo. And since Rabcat developed the game, you know you’re in for a treat, at least when it comes to graphics and animation. Indeed, many of you will know that Rabcat is behind legendary games like Castle Builder and the Forsaken Kingdom. And most recently the studio has brought another British hero on to the reels with the release of Robin of Sherwood. 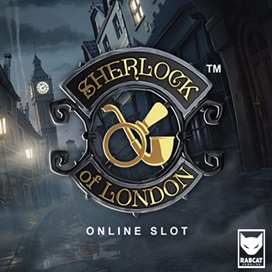 Now very much like other games released by the studio, Sherlock of London too has exceptional graphics. However, the gameplay is a lot more straightforward than other games they previously released. But rest assured it doesn’t mean that this 5 reels, 3 rows, and 25 paylines is a boring slot. In fact, the game has a lot to offer other than a compelling and engaging story line as you’ll read below.

Sherlock of London – game statistics and other game info

The main game of Sherlock of London delivers a good level of action, thanks to the Sticky Wilds with double win. In fact, whenever the man of the hour, Sherlock Holmes, lands on the reels (more than once) he’ll automatically activate either the Double Win, the Bonus Spin or the Connecting Wilds feature.

In essence, the double win feature awards players 2 Re-Spins with Sticky Wilds when 2 Sherlock Holmes appear on adjacent reels. And the Connecting wilds feature, on the other hand, award extra wilds that spreads vertically and horizontally as symbol link up to create a winning path.

Last but not least you’ll activate the Bonus Spin when a wild appears on the first or second reels. Essentially this game feature gives you a second chance at triggering either the Connecting Wilds or the Double Win feature we’ve previously described.

In Sherlock of London, the Scatter is the iconic duo. And it’s well identified too. Now, getting 3 Free Spins symbols will immediately award players 10 Free rounds.

During the bonus, the feature we’ve described above are all in play. And the game will get even wilder as you’ll see because Sherlock Holmes will always expend when one instance of the symbol appears on the game interface. But Watson, his companion, too plays a crucial role in this game. In fact, during the Free Spins, Dr. Watson is an additional wild. And so, he’ll help you create more winning combo.

Our thoughts on Sherlock of London

We’ve really enjoyed taking Sherlock of London for a spin. In fact, from our experience, the Free Spins feature was fairly easy to trigger. What’s more, is that Rabcat has added a nice chase element in the bonus game background. And so this is where the tale of Sherlock Holmes will take life. You’ll see if you opt to join the quest on any brands mentioned on casinoservice.org. Now if you want to make the quest for big wins last longer, we’ll remind you to place your bets. And we’ll also invite you to visit our casino bonus section.