With its simple design, Mega Pyramid video slot give players the chance to pocket 5,000x their original stake. And all of this while setting the reels in motion on a game that has a lightly animated background of Cairo’s desert, where the great pyramids are. The overall game interface has 5 reels and 4 rows and offers 30 paylines. And as you’ll see below the paytable of this slot is, on the higher end of the scale. What’s more, is that this slot is also linked with the Daily must drop jackpot which is rapidly climbing. And because of this Mega Pyramid video slot could well be one of the most profitable Egyptian theme slots to date. 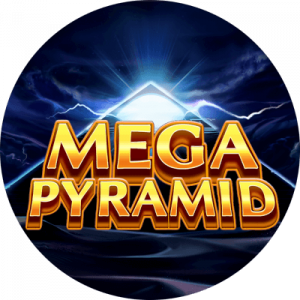 Besides, the Daily Jackpot Drop, there other features to trigger in Mega Pyramid video slot. But certainly, the most rewarding one is the 10 Free games you’ll activate when 3 Free Spins land on the game interface.

In essence, the Free Spins symbol can only land on the first, third and fifth reel. But it’s a sticky symbol for a random number of rounds. So you’ll have a second chance at triggering or re-triggering the feature when 1 or 2 symbols land in view. Plus, it always rewards 10 Free rounds, whether it lands on the reels in the base game, or when the feature is active.

Another rewarding feature is the Eye of the Pyramid, and it’s triggerable in both the base game and the Free Spins bonus. But in the Free Spins, this feature will clone symbols every round. And in the base game, it’s a random feature.

There 11 symbols in play in Mega Pyramid video slot, but no Wild. Nefertiti is the Scatter and always triggers the Free Spins as you’ve read above. Now if it’s the Daily Jackpot drop you’d like to win you’ll need the jackpot symbol to show up on the reels at least 3 times to play the bonus game.

Other game symbols include the Egyptian Gods Anubis and RA, a scroll and a scarab. These high-value symbols will award you anywhere between 72 coins and up to 4,500 coins for a 5-of-a-kind. The low-value symbols are the card suit and a circle and may reward you up to 60 coins when 5 align on a payline.

Mega Pyramid from Red Tiger Gaming is a fun, high variance game to play, and the symbol cloning feature truly adds excitement to the overall gameplay. Because the game can select any symbols, even a high-value one when players are lucky. The slot game also has a mini gamble game which is handy to double up small wins. But keep in mind that even if you can predict if the arrow will fall in the red or green multiple times.

Most casino bonuses won’t allow you to bet more than £5 a spin. And so the wager limit is also applicable to the gamble your winning mini-game. But can vary from one operator to another, so check the operators’ review on casinoservice.org to know more about this. Or read the t’s and c’s carefully before claiming an offer and making good use of this functionality.