Arabian Night is a progressive network jackpot game that landed in the lobby of online casinos across Britain in 2005. Since this game went live, it paid millions in jackpots. In 2010 the game paid its biggest jackpot worth a staggering £4.09 Million (€4.8 Million).

Very much like other progressive jackpot slots, Arabian Night is simplistic in appearance. The game has an RTP of 96.62%, 10 paylines, 5 reels, and 3 rows. If you know your slot well you’re probably surprised to see the high RTP this game offers. Indeed, we all know that generally speaking, progressive slots have RTP below 96.5%. But this game is perhaps the exception to the rule. Plus, winning a jackpot on this game is pretty simple. In fact, NetEnt made sure that everyone can have a stab at changing their life since the min bet is only 10p and the max bet is £20. 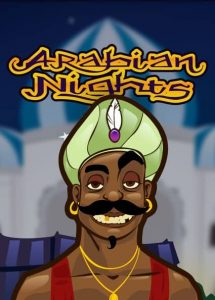 To sum up, Arabian Night has one main bonus feature, and it’s the Free Spins bonus. You’ll trigger the feature after 3 or more golden genie lamp land on the game interface simultaneously. After hitting this simple combination, you’ll also pocket a small win since the scatter pay in this game. And you’ll also have the chance to win more in the bonus itself since you’ll play 15 Free Spins with 3x multiplier on all wins.

The most powerful symbol in this game is the Wild. In fact, landing 5 symbols on the reels will automatically give you the jackpot advertised on the right corner of the game. Also, it’s worth pointing out that after winning the jackpot the game will display a small popup! So make sure to look out for that if you’re on auto-spin and happen to step away from your computer for a few seconds.

Other game symbols include a sword which could give you up to 2000 coins when 5 appear on the reels. The traditional pair of oriental shoes, on the other hand, will give you 1000 coins when 5 align on a payline. The tent pays 500 coins for every 5-of-a-kind, and the hat and the camel pay 300 and 150 coins respectively.

Our thoughts on Arabian Night

While Arabian Night may not be the flashiest online slot currently available in online casinos. It’s certainly one of the most rewarding ones! As you’ve read above the paytable of this game is quite high. So even the base game has huge winning potentials. Plus, it’s also very simple to understand and winning a jackpot is straightforward too. So you won’t need to jump through hoops to change your life with a spin! This game is available in all the casino advertised on casino casinoservice.org/uk. So pick your favorite and try your luck today!