When Rizk Casino came up with their brand concept, they knew they had a winning one. In fact, this brand originally owned by GiG quickly rose to fame in the operator’s multi-brand catalog. So much so that not long ago, it attracted the attention of a rival company who ended up taking over Rizk along with other and yet smaller brands also propelled by GiG’s ecosystem.

But when you have a winning concept in your hand, the sky’s the limit. And you have to capitalize on it. According to sources, the gamified casino is now ready to send Captain Rizk on a new adventure. And one that could be even more rewarding for players and fans of the legendary casino superhero.

Indeed, Captain Rizk’s new GiG is none other than its own branded Megaways slot. And the best of all is that it could reward players with just over 10,000x stake.

There’s a lot to like about Captain Rizk Megaways. The game is totally in line with the casino, and it’s an avalanche style slot with dynamic betways. Plus, it uses the brand iconic Wheel of Rizk. But in the slot, the Wheel of Rizk can reward or take away from players. 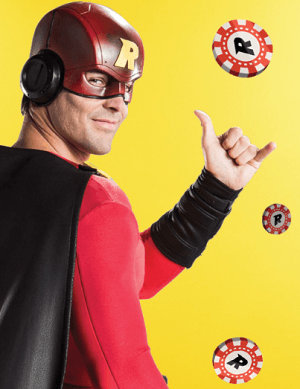 In essence, it’s activated after 3 wheel symbols appear on the reels and award 8 free rounds initially. But players have the option to gamble this to get up to 20 free spins. Or get a bit less if the wheel pointer stops on 4.

The new Captain Rizk Megaways also boast a mystery symbol feature. And it could be your key to unlock significant wins as the symbols clone itself across the grid before awarding a win.

Captain Rizk Megaways is going live on July 2nd on Rizk Casino. Will you dare to take a gamble on it?